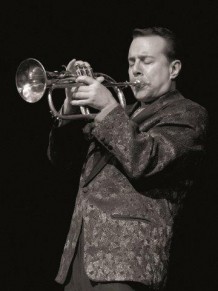 He was born in Portland, in the state of Oregon, USA. He performed as a soloist with all the grandest symphonic orchestras in Canada i.a with.:

In the world of entertainment has performed with such stars as:

He was regarded by American critics as one of the most popular trumpet soloists of our time. He received the annual award of the American criticism both as a soloist and a musical revue actor Forever Swing, which for two years with great success was helding a tournee across the US.

He is a performer, author, producer and arranger of the three events: A Tribute to Harry James,The Trumpet Greats andSwing, Swing, Swing, with whom he travels around the world. In June 2004 was the premiere of his production Swingmatism that added splendor for 10 nights of Vancouver Jazz Festival in Canada.

Over the past 30 years of his musical career, Gary Guthman has performed as a soloist with symphony orchestras around 200 on several continents, but most appreciates performance with the New York Pops Orchestra at Carnegie Hall in New York City on the invitation of the Skitch Hendersson -  the founder and long-term director of New York POPs. His orchestral show „Salut to the Swing” opened the season 2008-09 in Calgary Philharmonic Orchestra.

Gary Guthman plays on the trumpet of the Joseph Marcinkiewicz company

„Po prostu wiesz że kiedy Guthman przykłada trąbkę do ust coś świetnego się zdarzy” (EN: You just know that when Guthman puts into the mouth his trumpet, then something great will happen)

„To prosty fakt, że z 10 000 dzieci które uczą się grać na trąbce być może tylko jedno będzie prawie tak dobre jak on ” (EN: It's a simple fact that out of 10 000 children who learn to play the trumpet perhaps only one will be almost as good as he is)

„Gary Guthman nie tylko wzruszał i wprawiał w podziw ale także ze standardów opracowywanych na przestrzeni lat na tysiące sposobów, umie wydobyć cos jeszcze innego, nowego…. chwilami graniczy to z cudem.” (EN: Gary Guthman not only shrugged and put in in admiration but also with standards developed over the years in a thousand ways, knows how to bring out something else different, new .... sometimes it borders with a miracle.